Known issues that are being worked on (in order of priority):

03.12.2017: Reduced launch-times by about 90%! Apparently mapping files from host to guest is bad for what I was doing, hence the dramatic improvement. This also fixed the lags people were having while playing.
22.11.2017: After some careful consideration and fiddling around with settings, I've solved the following issue: New morgue-files are unreachable
18.11.2017: Fixed issues: Updates do not happen. IRC-bot isn't up.
14.11.2017: ssh is now up. Use terminal@underhound.eu:23 (I need 22 for the host so that any service technicians don't get too confused when trying to access it). Password: terminal. See further instructions here (CAO-key is valid).
13.11.2017: Webtiles is up. Will keep working on the rest during the week - aiming to have it all up by the weekend.
12.11.2017: Virtual machine is up. I'm working on configuring it. Update: morgues and logfiles can be found here. Update #2: progress is good, looking quite promising. Update #3: I'm now able to play using the terminal on the server.
09.11.2017: I've been unsure on how I should set up my new server, but I ended up settling on the same setup as the previous one. I'm currently facing some host-side difficulties (virtualization not being properly set up) regarding this, but hopefully this will be resolved during the weekend. Update #2: issue resolved, will continue working this weekend.
04.11.2017: You are now reading this on the new server. I've set up my website and PUBG map app and will start working on setting up crawl.
03.11.2017: rsyncs are done. Bad news: an entire disk crashed so badly that it is non-recoverable and not even visible in the operating system. Good news: it was in a RAID and 99.9%+ of the files are already on the new server, including the various "logfile"-files (which are the ones that the scores are recorded in), user-db and crawl-version-db. Setup of new server will begin soon. It will take longer to set everything up as it is a completely fresh server and I'll have to do setups from scratch and import what I can.
01.11.2017: rsync to new server has started. It is very likely that I will have to run a full crawl setup there as one drive seems to have crashed (two drives, RAID 1, problems on both drives)
30.10.2017: ETA for delivery of new server is 01.11.2017. Setting it up may take a long time. (weeks)
29.10.2017: Update: new server has been ordered. You should expect this to take a while (timeframe: weeks).
28.10.2017: Disk problems. Fixing as soon as possible, but expect server to be down for a while. Sorry for the inconvenience. 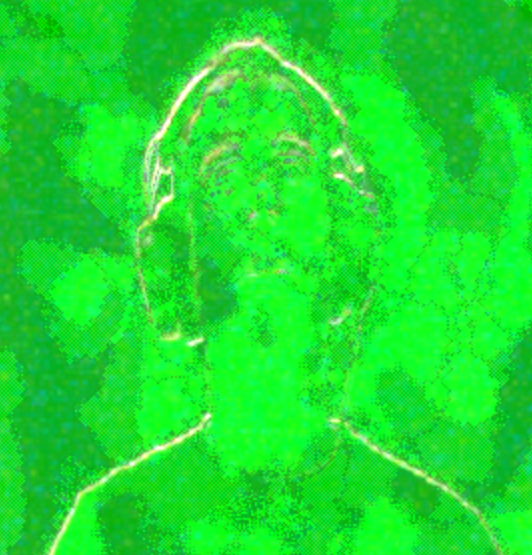 I've made a simple applicaton that runs on Linux, Windows, and (probably!) Mac using OpenFrameworks that takes input from your webcam and applies various filters. Check the gallery here and videos here. You